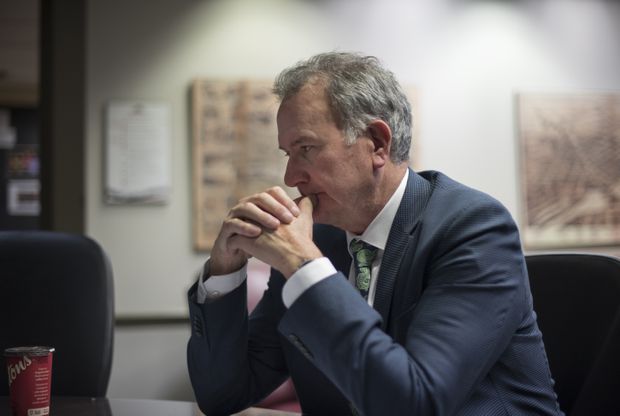 Kevin Davis, the mayor of Brantford, Ont., is photographed during an interview at Brantford city hall on Jan 18 2019. Mayor Davis had to pause to get control of his emotions when asked about the impact of the opioid crisis on his city.

One was a burger-joint chef who loved to skateboard when he was growing up. One was a big truck driver with striking blue eyes. Another was the father of four kids. Another was famous for his devotion to his dog, Rocco.

These four men all died of drug overdoses on a grey Friday this month in Brantford, the small city in Southwestern Ontario where Wayne Gretzky was raised. It is the most overdose deaths the city has had in one day, the equivalent – when compared to the size of its population – to 120 deaths in one day in Toronto.

Like other Ontario cities that have seen overdose rates rise as the opioid crisis moves from west to east across the country, Brantford is struggling with the loss. Mayor Kevin Davis had to pause to get control of his emotions when asked about the impact on his city. “It’s tragic, it’s devastating,” he said. “You feel almost a sense of hopelessness.” It is easy to “categorize and stigmatize” drug users, he said, but “these are real people.”

Just a year ago, the community of 100,000 seemed to be making some modest progress in its fight to prevent drug overdoses. A new addiction-medicine clinic had just opened up. Authorities were implementing a new drug strategy that aimed to spread the word about the dangers of drug use and get the overdose-reversing drug naloxone onto the streets.

But the area had 35 fatal overdoses last year, preliminary figures show. That is up from 22 in 2018 and 25 in 2017. Visits to the hospital emergency department for overdoses were also up in 2019, though the number of overdoses that emergency services were called to was down slightly. Now this – four deaths in a single day.

The deaths are part of a wave of overdoses that hit the community at the start of the new decade. A special alert from the Brant County Health Unit said that, including the four fatal ones, there were 17 in the first 12 days of January, more than in an average full month in 2019.

Other Ontario cities are also seeing higher numbers as the overdose epidemic that crested first in British Columbia and Alberta rolls through Canada’s most populous province. Public Health Ontario reports that 435 people died from overdoses in the first quarter of last year, an increase of 42 per cent from the same period in 2018.

“It’s been a bad couple of months,” said Stephanie Rochon, co-ordinator of Brantford’s addiction medicine clinic. She said testing of patients is showing stronger strains of fentanyl, as well as the even more potent carfentanil and other fentanyl analogs. Users often don’t know what drugs they are using, she said, putting them at high risk of getting a bad dose.

The four men in Brantford died on Friday, Jan. 10. The youngest was 26, the oldest 38. Police aren’t saying what drugs they may have used or where and how they died, pending the results of post mortems and further investigation. But Justine Radcliffe, a cousin of one of the men, Grant York, said she saw authorities removing two bodies from a house next to her place on Murray Street, a few minutes from the city core.

Ms. Radcliffe said her cousin’s wasn’t one of them. He died at home, she said. She called him a quiet person who cooked at the Works Gourmet Burger Bistro. The restaurant closed its doors for that evening, saying on Facebook that it had just received “some devastating news.”

Staff at the head shop next door, Crazy Bill’s, said Mr. York was a “sweet guy” who often came in for cigarettes or energy drinks. To help prevent more deaths, they have given away dozens of drug-testing kits since the overdoses this month.

A death notice called Mr. York an “amazing soul” whose “humour, laughter, loyalty, love for life and impact on others will be missed.” His mother, Jennifer York, posted on a local news social-media page that “he was not an addict, purely recreational.” She warned others to know their neighbours and learn to recognize drug houses, with lots of people coming and going and expensive vehicles outside. “Watch your surroundings. I can not stress this enough!” she said.

Two of the other men, Kevin Waring and Richie Britton, were good friends. Mr. Waring was a long-haul trucker. His Facebook feed includes pictures of a gleaming white transport truck and a sign that reads, “Beer is the perfection of water.” His nickname was Bundy, after the gargantuan professional wrestler King Kong Bundy.

His pal, Mr. Britton, liked soccer and played pool in a league that had weekly games at local bars. His “fur baby,” Rocco, a boxer, was like family to him, friends said.

One friend, Cody Henry, organized drinks at a downtown pub to mark the passing of the two men. He said they were “the type of guys who, if they were your friends, would do anything for you. There should have been more people in the world like them.” Mr. Britton was always helping friends move. Mr. Waring was supposed to give Mr. Henry some tips on driving a truck for a living the day that he died.

Mr. Henry’s girlfriend, Kristen Ferguson, said Mr. Britton would hang out with her when Mr. Henry was away on motorcycle trips. The two would talk and watch videos on YouTube. “I lost a brother” when he died, she said, wiping away tears as she stood outside the pub.

The fourth man, Cody Annis, was remembered in his death notice as the “beloved dad of Aliyah, Shyvon, James ‘Devon’ and Zayden.” The notice said, “Cody was happiest when he was outdoors and in nature, fishing pole in hand and kids beside him.”